It's been two whole decades since heavy metallers Disturbed released their smash hit debut album, The Sickness! The five-times platinum record launched the band into the metal stratosphere with huge tracks like "Down With the Sickness" and "Stupify," gaining them loyal fans the world over! Now, to celebrate the 20th anniversary, the band is heading out on a massive tour that comes to Sunlight Supply Amphitheater on Friday 11th September 2020! They'll be joined for a rare appearance by Aaron Lewis-fronted alt-metal band Staind, and heavy metal supergroup Bad Wolves, in support! 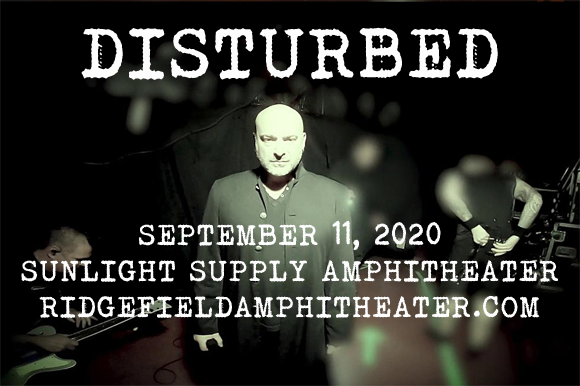 American heavy metal band Disturbed began life in 1994 under the name Brawl. After a change in line-up, when original vocalist Erich Awalt was replaced by David Draiman, the group went on to record its debut album, The Sickness, which was released in 2000. The Sickness peaked at number twenty on the Billboard 200 and sold over four million copies in the United States, launching them to heavy metal stardom. To date, the band has released seven studio albums, five of which have consecutively debuted at number one on the Billboard 200. Their most recent studio album is 2018's Evolution, which launched the singles "Are You Ready" and "A Reason to Fight".