A goliath of the classic rock genre, Foreigner comes to Sunlight Supply Amphitheater on Friday 17th July 2020 on the Juke Box Heroes Tour! Foreigner's longevity as a touring act is testament to their the quality of their timeless, world-renowned songs and their captivating stage-craft – they never cease to amaze with their high-energy shows that captivate fans and keep the good times coming! Not only is the name Juke Box Heroes appropriate because of their classic song of the same name, but also because Foreigner will be joined in support by fellow classic rock hit-makers Kansas & Europe! 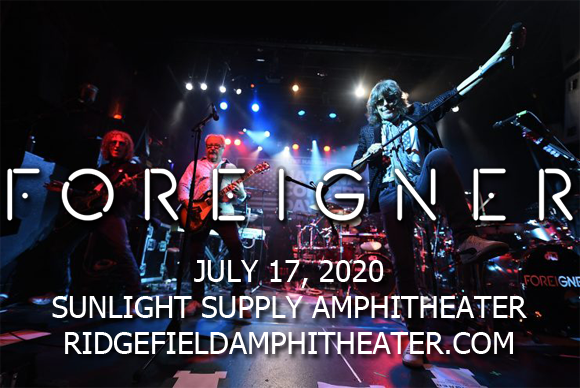 Named after the transatlantic collaboration that birthed their music, Foreigner was formed in 1976 by Englishmen Mick Jones (former Spooky Tooth guitarist) and Ian McDonald (former King Crimson keyboard player) and American vocalist Lou Gramm. The following year, the band released its self-titled debut album, which launched the hits "Feels Like the First Time", "Cold as Ice" and "Long, Long Way from Home," and was eventually certified five-times platinum. Their debut was also the first in a string of six consecutive multi-platinum albums for the band (released over the period of 1977-1984), and the first of 10 multi-platinum albums in total. In addition to their success with album sales (Foreigner has had worldwide sales of more than 80 million records – including 37.5 million records in the US – making them one of the world's best-selling bands of all time), the band has also charted 16 top 30 hits, including "I Want to Know What Love Is", their 1984 smash hit single, which topped the charts around the world, including in the UK and US.