Get ready for some loud, proud and in-your-face tunes as Sammy Hagar and the Circle & Whitesnake come to Sunlight Supply Amphitheater on Tuesday 15th September 2020 for the hottest co-headlining rock show of the summer! That's right, these two legendary bands will be bringing you a full set each of some of the greatest hard rock hits and power ballads the '80s ever saw! It's going to be one hell of a night with an electric atmosphere as these epic groups take to the stage, with fellow rockers Night Ranger in tow! 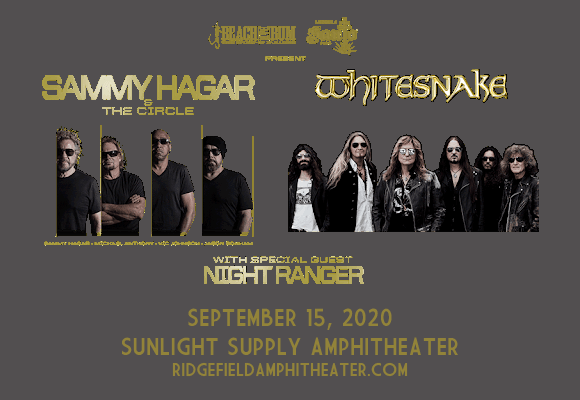 Former Van Halen frontman Sammy Hagar has sung for several groups throughout his career, including Montrose, Hagar Schon Aaronson Shrieve (HSAS), Los Tres Gusanos, Sammy Hagar & The Waboritas, Planet Us, and Chickenfoot, and has also enjoyed a successful career as a solo artist. Sammy Hagar and the Circle is a supergroup formed of Hagar, former Van Halen bassist Michael Anthony, John Bonham (drums, percussion, vocals) and Vic Johnson (lead guitar). The group is the perfect vehicle to perform all the incredible hits from such a mighty back catalog, and in addition to covering these classic tunes, the band also has a smash hit album of original material – 2019's Space Between, which reached number four on the Billboard 200, and topped four more Billboard charts.