The Black Crowes are back! Rich and Chris Robinson and co have reformed for their first tour since 2013, and they're coming to Sunlight Supply Amphitheater on Wednesday 25th August 2021! Having buried the hatchet, the blues-rock renegades are touring in celebration of the 30th anniversary of Shake Your Money Maker, their critically-acclaimed debut album, and they'll be playing it in full, giving fans a dream show of filthy Southern rock! 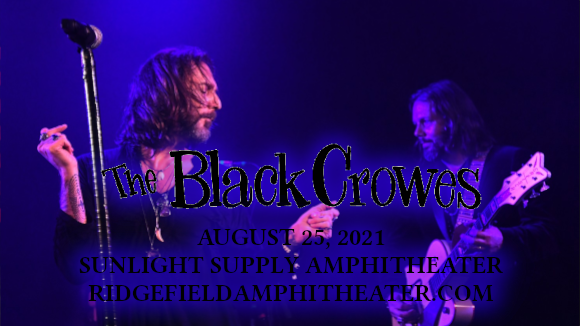 When most of the music industry had turned away from visceral, down-and-dirty rock and roll in the 1980s, The Black Crowes took their love of 1970s blues rock and suddenly made it cool again. Formed in 1984 by brothers Chris and Rich Robinson, the group made its debut in 1990 with Shake Your Money Maker and by the end of the year, they were hailed in multiple publications as the next big thing. Their follow-up to Shake Your Money Maker, The Southern Harmony and Musical Companion (1992), hit the top spot on the Billboard 200 and launched four number one singles: "Remedy", "Thorn in My Pride", "Sting Me", and "Hotel Illness". Over the Black Crowes' entire career, which includes two hiatuses, they have released eight studio albums. The band reformed in 2019, after four years apart, to tour in celebration of the 30th anniversary of Shake Your Money Maker.