EVENT RESCHEDULED TO FRIDAY 19TH MAY 2023. Originally Friday 20th May 2022. All original tickets are still valid!

Multi-platinum-selling, hit-making pop-rock wonder Matchbox Twenty are coming to Sunlight Supply Amphitheater on Friday 19th May 2023 (Rescheduled from Friday 20th May 2022) (Rescheduled from Thursday 23rd September 2021) for their first outing together in three years! The massive band is celebrating twenty years since the release of their four-times platinum sophomore album Mad Season, and there's a chance fans will also get to enjoy new material, as well as huge hits from throughout their career like "Push" and "3 A.M."! They'll be joined for the event by special guest support act The Wallflowers! 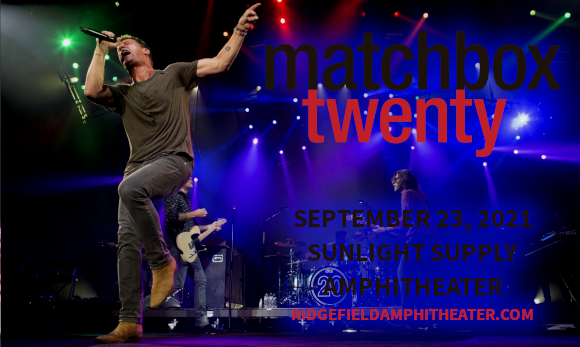 Matchbox Twenty began in Orlando, Florida in 1995 as a follow-up project to a previous Orlando alt-rock group Tabitha's Secret after it disbanded. The band had instant success with its debut album Yourself or Someone Like You, which was released the following year and went 12-times platinum in the US, as well as reaching multi-platinum status in Australia, Canada, and New Zealand. The album also launched four US top-40 singles – "Push", "3 A.M.", "Real World", and "Back 2 Good" – several of which also had global success. In 1999, the band's lead singer, Rob Thomas, featured on the three-time Grammy Award-winning Santana single "Smooth," which raised the band's profile even further. In 2000, the group released Mad Season, which charted in the top three on the Billboard 200 and was certified four-times platinum in the United States. 2002's More Than You Think You Are was also a multi-platinum-selling success. Over the next few years, the band saw several lineup changes and a few periods of hiatus, but in 2012 they returned with the number-one album North.